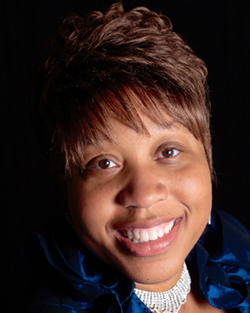 Evangelist Lisa Outlaw, was born and raised in Philadelphia, Pennsylvania. She received the Holy Ghost at the age of 14 years and was called into the ministry at a very early age. After graduating from Girard Academic Music Program in 1988, she attended La Salle University at the age of 16 from 1988-1992 and graduated and received a Bachelors of Science in Business Administration and majored in Accounting. She eventually increased her skills by adding the computer sciences to her resume, and currently works as a Director of Internal Audits. She received international certifications, such as, Certified information Systems Auditor (CISA), Certified Information Systems Security Professional (CISSP), and ITIL Foundation from the United Kingdom.

On January 27, 1997, Evangelist Outlaw, met her husband Elder Tony Outlaw, and they married the following year on November 20, 1998, at the Upper Room, in Raleigh, North Carolina: They have 2 children. In April 1999, Evangelist Lisa Outlaw accepted her call to ministry, under the dynamic leadership of Superintendent Dr. Patrick L. Wooden, Sr., of the Upper Room. She is a very active citizen for the Kingdom of God and is also the founder of Missions2Nations, which is a nonprofit organization focused on promoting Jesus Christ throughout the world. In 2004, she received her diploma in Biblical studies with cum laude honors. Evangelist Outlaw loves God first, her family, and her church. She is known for preaching the gospel with power and authority, living a lifestyle of holiness, and as a dedicated Women of God.

Developed by ITNOJ Group, LLC - Bread of Life Worship Church is a ministry of Missions2Nations